Many people are initially hesitant to twiddle the tuning gears because doing so changes the places on the fretboard they are familiar with.

It does take some getting used to, like moving to a new country and being immersed in another culture and language. However, there are parallels and relationships between different tunings, much the same as there are between languages based on Latin.

The most important thing to remember is that playing in an altered tuning ultimately makes things easier.

What I look for are happy accidents: convenient beauty.

An impossible finger twister in regular tuning can become a simple chord progression in G tuning, for example.

To play in altered tunings you’ll need a grasp of the intervallic relationships between adjacent
and nonadjacent strings.

One of my favorite ways to illustrate this is with tuning maps, where I provide the acceptable notes for each tonality and introduce the “spiderweb” of connecting intervals
and shapes, paying special attention to thirds and sixths, as they are extremely important melodically and conceptually.

As you learn the fretboard try to envision it the way you would a piano keyboard. Find all the white keys first. Every letter-name note on every string must be instantly identifiable. Don’t worry
about the sharps and flats (the black keys on the piano) at first. They will become obvious once you know where the natural notes are.

It’s also important to be able to visualize and recognize shapes. What do thirds look like? How about sixths and octaves? Eventually you’ll not only feel as comfortable playing in G tuning as you do in standard tuning, but you’ll recognize the fretboard in G tuning as a more convenient way to play certain shapes and evoke deeper, more complex, sounds and tonalities.

Why Retune Your Guitar?

On the guitar you have a choice of six starting points and twelve subsequent determined choices of tones. 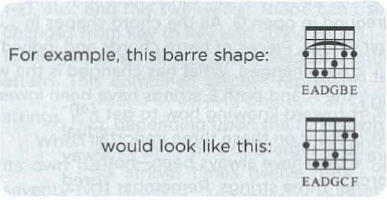 The standard barre shape would be offline and unusable. But by lowering the top two strings a half step to Band E respectively (from C and F) the E barre shape is playable.